A Brief History of Machine Tools 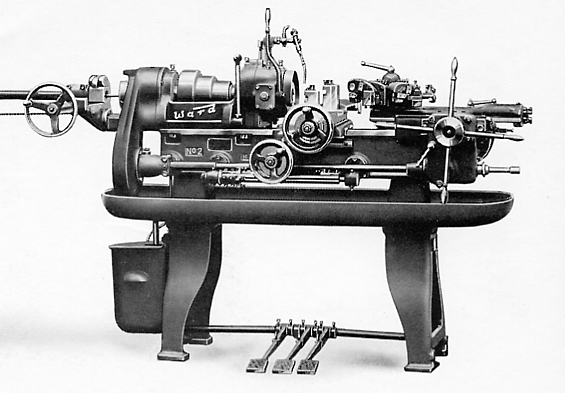 What is a Machine Tool & When did it First Appear?

There is some debate over what constitutes a machine tool. It is clearly important to define what a machine tool is in order to be able to identify the earliest genesis of the machine tool. A simple definition would be a tool that is not ‘freehand’ in other words, the toolpath is guided and managed by the machine singularly, or with some human input. Using this definition, the wooden screw cutting lathe dating to 1483 was the first true machine tool. This early machine tool not only spun the material to be cut, but the cutting tool element’s path was also mechanically controlled. There were, however, spindle lathes before this where the user controlled the cutting tool. These lathes are not strictly seen as mechanical machine tools as the spindle is not viewed as a ‘tool’, in its own right.

Now we have a clearer understanding of what a machine tool is, we can more clearly understand the precursors to the machine tool. Prior to the emerging of the machine tool proper we had mechanically enhanced tools such as potters wheels and bow drills. These tools existed in Egypt around 2500BC and earlier. Emerging out of these devices came the early lathes that can be seen in europe between 1000-500BC.

Emergence of the Machine Tool

Moving forward to the latter part of the middle ages and the age of enlightenment we see a progression from these tool aids and see the development of machine tools as we would recognise them today. The machines that emerged during this era made metal parts and had a machine guided toolpath. The presence of clockmakers and the age of inventors like Leonardo da Vinci advanced the knowledge and skills needed for the development of these machine tools. This develpment set the stage for the industrial revolution to come.

The industrial revolution was at the heart of machine tool development and progression. This period of machine tool invention was driven by necessity. Machines were not created for industry but by industry. Problems existed in the manufacure of parts and machines were developed to solve these problems and increase efficiency and quality or production. The industries that drove this mechanisation and development of machine tools were the great industries of the time, the weapons industry, textiles industry and steam engines.

For example, the textile industry needed looms that not only improved the automation of the cloth production process, but also needed metal machines that were more relaible and durable than the wooden looms they replaced. The need for manufactured metal parts that could be produced quickly and accurately to service these new metal looms meant the development of new metal-working machine tools.

In the steam engine industry there was a need for refined accurate metal parts such as pistons and piston cylinders, for which the cylinder bore machine tool was developed.

Around 1800 in england the first commercially available machine tools began to appear. These were tools designed for a specific task that was ubiquitous to many industries. Some of these early commercial machine tools included metal planers, milling machines, turret lathes and screw cutting lathes.

These machine tools and their accuracy in producing parts allowed for standardisation and interchangeable parts.

If we dont have it in stock we will hunt it down.

If you have any questions about our service click here